No ratings, yet!
Registration Cost: 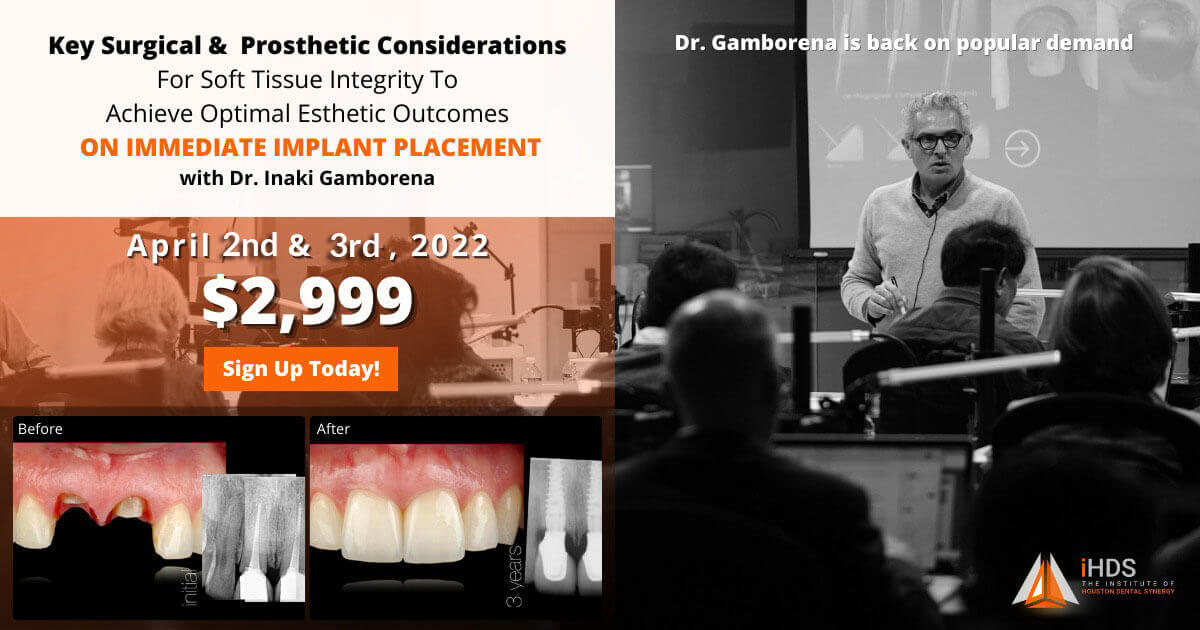 Dr. Gamborena is back on popular demand

The objective of this 2 days course, is to provide the attendees with a deep theoretical knowledge but more important with a deep management of the periodontal surgery around implants as well as the prosthetic concepts for single tooth immediate implant placement in the esthetic zone in order to maximize the peri-implant soft tissue esthetics around the final restorations – critical element for achieving gingival integration and esthetic success long term.

In this course a live surgery will be performed applying the concept proposed besides a quantity of videos allowing the participants to have a clear overview of the concept.

On the contrary we will also focus, on the recessions around dental implants specially on the anterior implants that have been performed without any CTG. We will discuss the different treatment alternatives to fixing them as well as a classification to visualize the difficulty taking into account the prosthetic and surgical considerations.

Attendees will learn through a surgical workshop on pigs to harvest tissue for connective tissue grafts as well as different suture techniques to propel their knowledge while grafting around implants.

We understand situations arise in which you may need to cancel a course. Course cancellations must be made at least 30 days before the course to receive a full refund; otherwise, a 50% credit will be given for a future IHDS course.
Travel Accommodations

Dr. Gamborena graduated as a dentist from the Dominican Dental University, UOD in 1989.

Dr. Gamborena has been an affiliate professor in the Department of Restorative Dentistry at the University of Washington School of Dentistry in Seattle, Washington, since 2001.

He is Editor-in-Chief of the Spanish version of Quintessence Técnica.

He is the author of the book "EVOLUTION: Contemporary Protocols for Anterior Single Tooth Implants" I. Gamborena/ M.B. Blatz, Quintessence Publishing Co Inc., 2014.

Dr. Gamborena is the inventor of the "thin temporary abutment concept: how to maximize space to enable soft tissue growth" Nobel Biocare, November 2014.

He has a private practice in San Sebastián, Spain, dedicated to cosmetic, rehabilitation and implant dentistry.

Register To Save Your Seat Today!

Opened in 2019, our state-of-the-art classroom offers 30 fully equipped workstations, monitors for viewing live surgeries and space to engage with other participants. The training facility is designed for hands-on practice, live patient demonstration and surgery. With Houston’s accessible location, iHDS is positioned to attract students and educators who share our commitment to excellent education and improved dentistry.

Check out the many options below that offer education across the dental disciplines, taught by local and global experts. Consider bringing other members of your team for greater impact at your office. 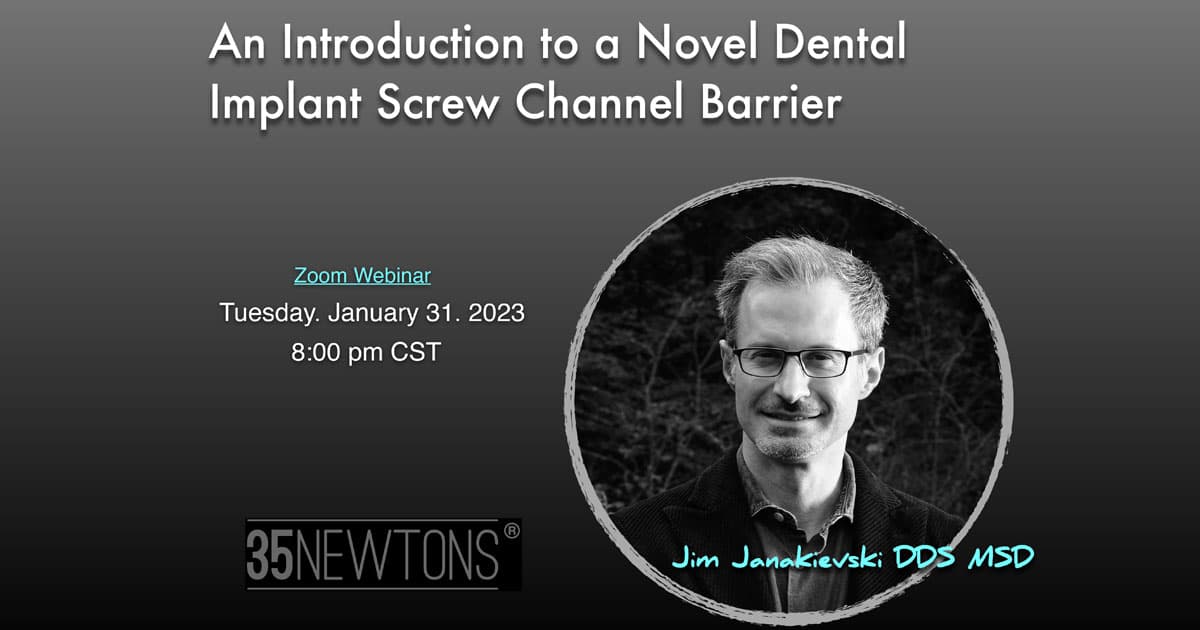 An Introduction to a Novel Dental Implant Screw Channel Barrier

Once registration is submitted, participants will receive an email containing a link to the event. This link will only be active at the event start time. Only the first 100 people can be accommodated into the live stream.

Become a go-to Implant Expert! Instead of turning away dental implant cases, offer more to your existing patients who know, like, and trust you. This program will help you specialize your skills, broaden your knowledge, and give you the confidence you need to do implant treatments the following work day in your own practice. 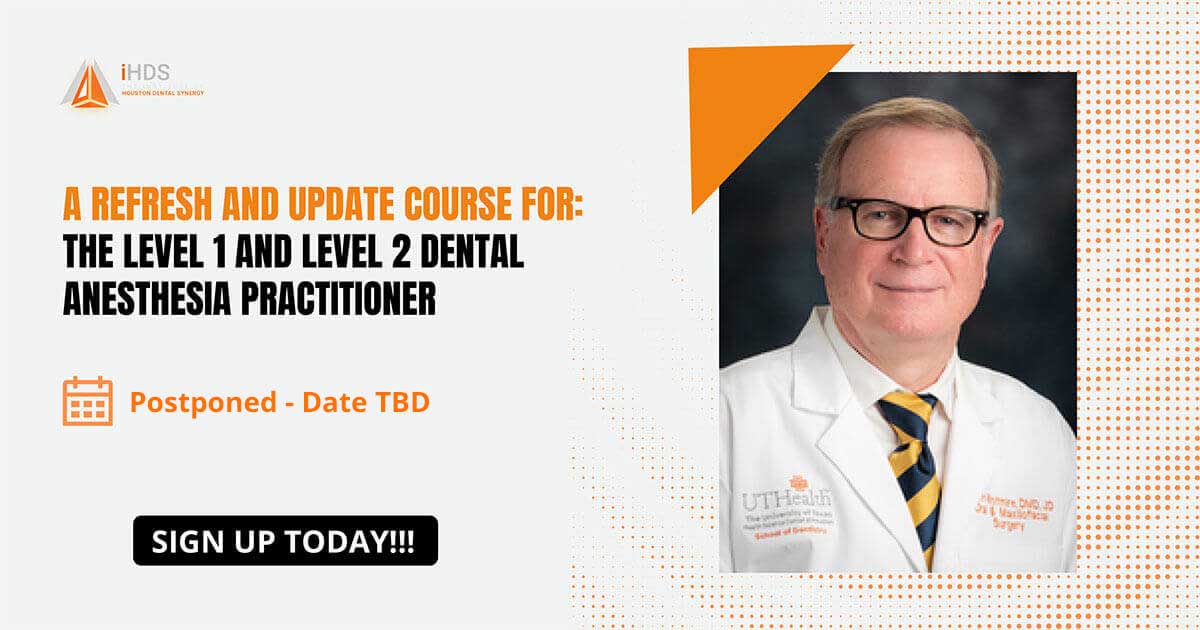 A requirement for maintaining a level 1 or level 2 anesthesia permit is to remain current in the controlling statutory anesthesia rule and requirements. Additionally, permit holders must periodically refresh and update their anesthesia and emergency preparedness knowledge for safe office anesthesia practice.